Most meals in rural communities around the world are cooked with wood, charcoal, or other biomass.  The simplest form of cooking is the three-stone stove, which is exactly what it sounds like: three stones holding up a pot with a fire lit underneath.  Families (usually women and children) spend many hours each day collecting biomass for cooking and heating water for washing.  The fires are not very efficient, which means that a lot of wood or other fuel is needed.  The fires also produce a great deal of smoke and other pollutants and raise the dangers associated with open fires, especially if cooking is done indoors.  Finally, collecting biomass can lead to depletion of natural forests in many areas. 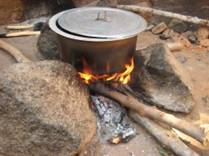 Charcoal makes for a slightly more efficient fuel, but it is difficult to produce, and excessive demand can lead to deforestation as well.  If charcoal is the primary fuel, it can use up much of a family’s monthly income.  One study in Rwanda showed that a typical family paid $5 per month per person for charcoal.

There has been a great deal of work done on development of “improved cookstoves,” with the goals of improving efficiency from the current level of 10-15% for a three-stone stove up to 40%, as well as reducing indoor air pollution and fire-related hazards.

However, recent developments in three primary technologies have led to an entirely new “paradigm”, or way of thinking.  The three technologies are electric induction cooking, solar electric (PV) systems, and Pay-As-You-Go (PAYG) financing technologies.  This note presents a basic overview of where this paradigm shift came from and where it is leading.  A recent study by DFID (https://elstove.com/2016/05/26/dfid-uk-aid-reports/) discussed solar powered induction cookstoves and came to the conclusion that this technology could replace traditional fuels as early as 2020.  More recent work by Doug Danley and Robb Walt have quantified this idea and concluded that this technology is ready now — especially when combined with PAYG financing programs now being implemented around the world.

We use cookies to ensure that we give you the best experience on our website. If you continue to use this site we will assume that you are happy with it.OkNo